Joe Duffy Volvo joined Volvo Cars' global initiative with a clean-up session on the beach at Sandymount Strand our team worked with Dermot Bannon, Volvo Cars brand ambassador, and took to the shoreline at Sandymount in Dublin for the clean-up to clear plastic and other waste. We were so proud to support support the 2018 United Nations World Environment Day.

Around the world, more than 850 Volvo Cars employees and retailer staff in 16 countries put down their tools, left their desks and picked up litter in aid of World Environment Day and the UN Environment's Clean Seas campaign.

World Environment Day, established in 1974, is dedicated to taking action and taking care of the earth, and this year's theme is 'Beat Plastic Pollution'. According to the United Nations Environment Programme, more than eight million tonnes of plastic ends up in our oceans each year. If nothing is done to alleviate the situation, by 2050 there will be more plastic than fish in the sea.

Joe Duffy and Volvo Cars were proud to mobilise its workforce in support of the Clean Seas campaign and help Turn the Tide on Plastic. This initiative extends the company's own Volvo Cars Beach Clean Up campaign, which has been running since the start of the Volvo Ocean Race in October last year.

In its wider commitment to environmental responsibility, Volvo Cars, last year announced an industry-leading commitment to electrify all new Volvo cars launched after 2019. It has since reinforced this strategy, stating in April that it aims for fully electric cars to make up 50 per cent of its global sales by 2025.In terms of operations, in January this year, Volvo Cars' engine plant in Skövde, Sweden, became the company's first facility to achieve climate-neutral manufacturing processe 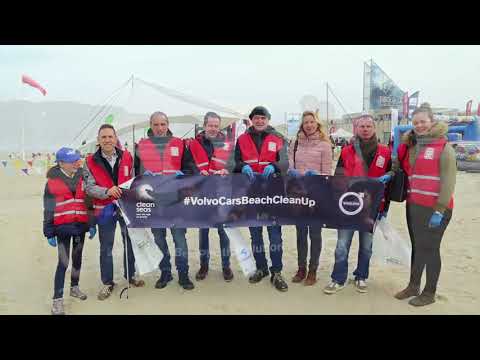